What are Ashwagandha Gummies?

Ashwagandha is known to improve wellbeing, relaxation, sleep quality, mental alertness, and more. For hundreds of years, people have been using the roots and fruit of ashwagandha for medicinal purposes. Ashwagandha-infused gummies are becoming a trend as it tastes good, is easy to digest and is good for you. 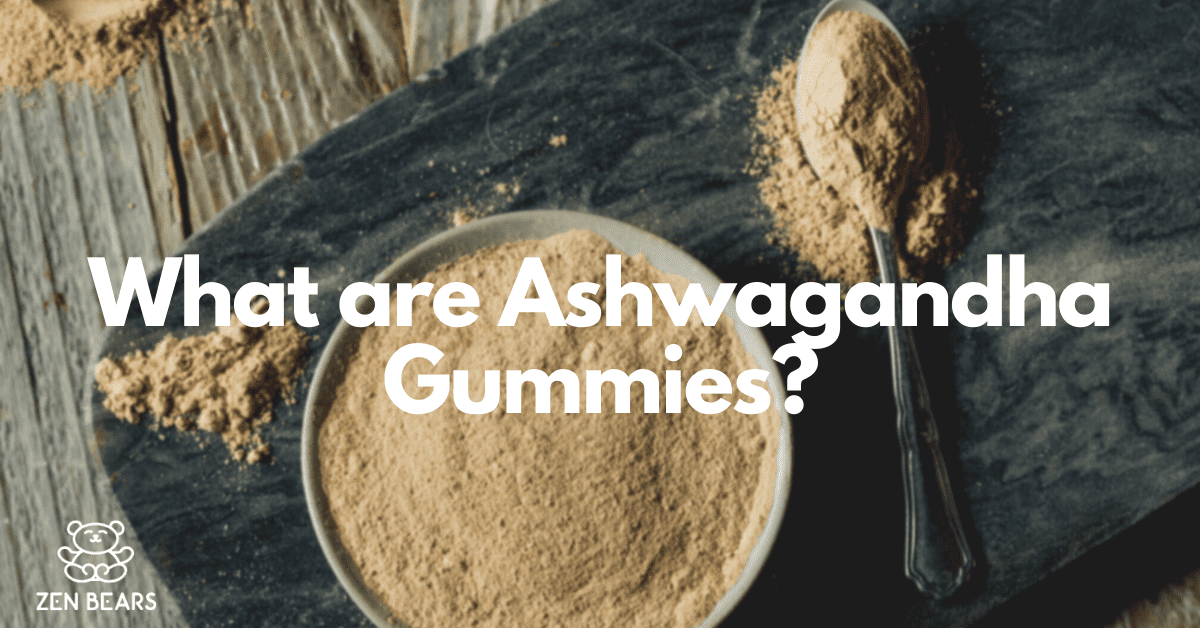 Gummy candies, or gummies, are gelatin-based chewable sweets and are widely popular in the candy-making industry. Supplement gummies are becoming popular nowadays as they taste very similar to gummy candies and appeal to children as well as adults who may not like swallowing pills. These sweet treats are usually made with corn syrup, sucrose, gelatin, food colouring, and water.

Ashwagandha is an evergreen shrub that is known to have many health benefits. Ashwagandha is often called Indian ginseng or winter cherry and is indigenous to northern Africa, India, and the Middle East but can be grown in countries with moderate climates.

Research also suggests that ashwagandha is an adaptogen. A study was conducted by the Indian Council for Medical Research Guidelines for research in humans (ICMR-GCP) wherein 64 subjects between the ages of 18 to 54 years old with mental stress were studied for 60 days. They were divided into two groups: a placebo group and the ashwagandha group.

Adaptogens are certain herbs or mushrooms that have health benefits including resisting the damaging effects of stress while promoting body functions and processes. The adaptogenic effects of ashwagandha result from activating the heat shock proteins that protect against cell damage. They can also improve cell energy production by increasing the adenosine triphosphate (ATP), preventing cell death and improving functions of the immune system.

How to take Ashwagandha gummies?

Ashwagandha is usually available in capsules, tablets, oils, creams, and powdered form but can also be infused in gummy candies. Gummy candies are popular nowadays as ingesting ashwagandha gummies is a great and easy way to get the health benefits of the herb. However, according to Neha Vyas, MD, a primary care specialist suggested that when it comes to health benefits, gummy supplements have fewer vitamins and minerals than regular vitamins as gummy supplements have limited shelf stability and become less potent in time. The recommended dose is 1 to 2 ashwagandha gummies, twice daily.

According to Dr John Douillard, PhD, chiropractor, author of Perfect Health for Kids, ashwagandha can also be used by children. The adrenal glands produce cortisol and overproduction of this hormone increase immunity. Ashwagandha is particularly helpful for preventing colds and can be used when kids are stressed or tired.

However, more research is needed to know the correct dosing of ashwagandha for children. Consult with your child’s paediatrician first before giving them ashwagandha gummies.

Does Ashwagandha have any potential health benefits?

Ashwagandha is known for its stress-relieving properties. It’s classified as an adaptogen, which is a substance that helps the body cope with stress. Ashwagandha helps control mediators of stress, including heat shock proteins (Hsp70), cortisol, and stress-activated c-Jun N-terminal protein kinase (JNK-1). It also reduces the activity of the hypothalamic-pituitary-adrenal (HPA) axis, which is a system in the body that regulates the stress response.

A study was published by the National Library of Medicine on the “Adaptogenic and Anxiolytic Effects of Ashwagandha Root Extract in Healthy Adults”. The study was conducted at Risk Care Hospital, Thane, Maharashtra, India. 58 participants were divided into two groups and given 250 mg and 600 mg of ashwagandha extract for 8 weeks, while the last group was given 250 mg of placebo.

The results show that the groups that took Ashwagandha had significant improvement in sleep quality and anxiety caused by stress compared to the placebo group. However, more research is needed to form a consensus on the appropriate forms and dosing to address stress and stress-related disorders.

According to the International Institute of Herbal Medicine (IIHM) in Gomti Nagar, ashwagandha is also known to fight diseases. It was found to be useful in neurodegenerative diseases such as Parkinson’s, Huntington’s, and Alzheimer’s diseases. It is also an anti-inflammatory and anti-arthritic agent and is useful in helping with arthritis.

A study was also published by the Council Of Scientific And Industrial Research on the hypoglycemic, diuretic, and hypocholesterolemic effects of Ashwagandha. The research was conducted on six non-insulin-dependent diabetes mellitus (NIDDM) subjects and six hypocholesterolemic subjects.

After 30 days, results showed that there was a decrease in their blood glucose similar to an oral hypoglycaemic drug.

Ashwagandha may also benefit cognitive function. It may improve memory, reaction time, the ability to perform tasks and improve sleep.

A study was conducted by the Journal of Dietary Supplements in 2017 on 50 adults to know the efficacy of ashwagandha in improving memory and cognitive functions. The results showed that Ashwagandha may be effective in enhancing memory in people with mild cognitive impairment, and also improving function, attention and information processing speed.

How Long Does Ashwagandha Take to Work?

The effects of ashwagandha will depend on how much you take and what you’re taking it for. Most clinical trials on ashwagandha take at least 30 days before testing for the effects as herbal medicines are known to take longer to kick in.

For reducing cortisol and blood sugar, you will see effects in 1 to 2 weeks, but it would take up to 60 days to feel the full effects of the herb. For mood changes, it will take a couple of weeks, and for physiological changes, it would take much longer.

How to store Ashwagandha Gummies?

Due to heat sensitivity, the gummies should be stored in a cool and dry place so they won’t melt and get sticky. If this happens, you can place them inside the refrigerator until the gummies cool down.

Are there any side effects to Ashwagandha Gummies?

Ashwagandha gummies are generally safe, but there are not enough studies to fully examine the possible side effects. Taking large amounts of ashwagandha can lead to digestive upset, diarrhoea, nausea, and vomiting.

This may be caused by an irritation of the intestinal mucosa which is concerned with digestion and absorption of dietary nutrients. Consult your doctor first before taking any ashwagandha products.